You Don’t Have The Right To Cry is a new single taken from Kristina’s forthcoming album Where The Sun Don’t Shine.

Kristina Maria is a Canadian born, multi-gold artist who broke onto the pop scene in 2010 under the management label, Lupo One Entertainment Inc., founded by famed manager Vito Luprano, who is better known as a former Senior VP of A&R Sony Music. A key player in the success story of artists such as Celine Dion, Luprano came out of semi-retirement after hearing the powerful voice behind this future pop sensation.
After solidifying the deal in a single handshake, Vito vouched for her talent with some of the industries best writers and producers. Kristina spent the next year in recording studios around the globe – with pit stops in Sweden, Anguilla, New York City, London and Miami. The singer/song writer co-wrote 11 of the 14 tracks on her first album “Tell the
World” (2012) in collaboration with the hottest writers and producers in contemporary pop: Kristian Lundin (One Direction, Celine Dion, Britney Spears), Anders Bagge (Madonna, Jennifer Lopez), Peer Astrom (Glee, Selena Gomez, Cyndi Lauper) Billy Steinberg and Josh Alexander (Cee Lo Green, Selena Gomez). What resulted, was an instant impact on the pop charts!

Kristina’s debut single, Let’s Play, achieved #1 in Canada (BDS Canadian all format) and nearly reached Platinum status. If you listened to the radio in 2012, you couldn’t help but hear Let’s Play over and over again across the country. The success of her first single was no surprise, and she followed that up with another infectious track Co-Pilot featuring Laza Morgan, a well recognized reggae artist. The success of Co-Pilot and its French version, featuring Corneille, netted Kristina a record deal with France’s Wagram label. Co-Pilot reached a combined 6 million (and counting!) views on YouTube, Gold status, #2 on Canada Billboard Emerging artist list, and is still heard on the radio two years later.

“Tell the World” was honored with a Juno nomination for Pop Album of the Year, along with international phenomena such as Justin Bieber and Carly Ray Jepsen. Let’s Play won Kristina the Socan Pop/Rock Award in 2012, along with three nominations at the Canadian Radio Music Awards. She was the most played independent artist of the year and most played pop artist of the year in Canada. Notwithstanding, her success reaches beyond Canada and France! Kristina’s powerful vocals and contagious dance tracks have jumped the border and have begun to spread to the United States as well.

This Year, she will be looking to expand her success with the anticipated release of her second album. The first single, Move Like a Soldier, from the forthcoming self – titled album was penned by Kristina in collaboration with legendary writers Kristian Lundin, Savan Kotecha (Carrie Underwood, Christina Aguilera, One Direction) and John Amatiello (Britney Spears, Ace of Base, Backstreet Boys). Sub-Zero, co-written with Mark Feist (Destiny’s Child), Hookman Bonds (Swizz Beatz, Jason Derulo, New Kids on the Block) and mixed by Jason Nevins (Lady Gaga, Nelly and Florida George Line, Run DMC). Upon release, a portion of proceeds from Move Like A Solider will go to Mothers Against Drunk Drivers (M.A.D.D Canada).

With this many musical geniuses in the room, her encore album is sure to surpass expectations – and expectations are high! 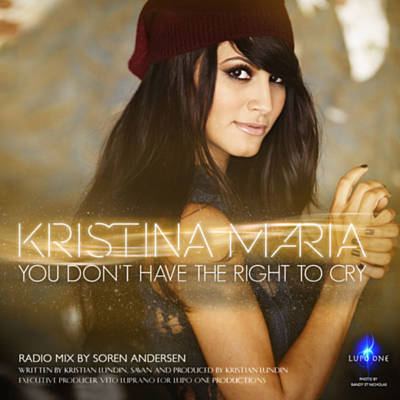